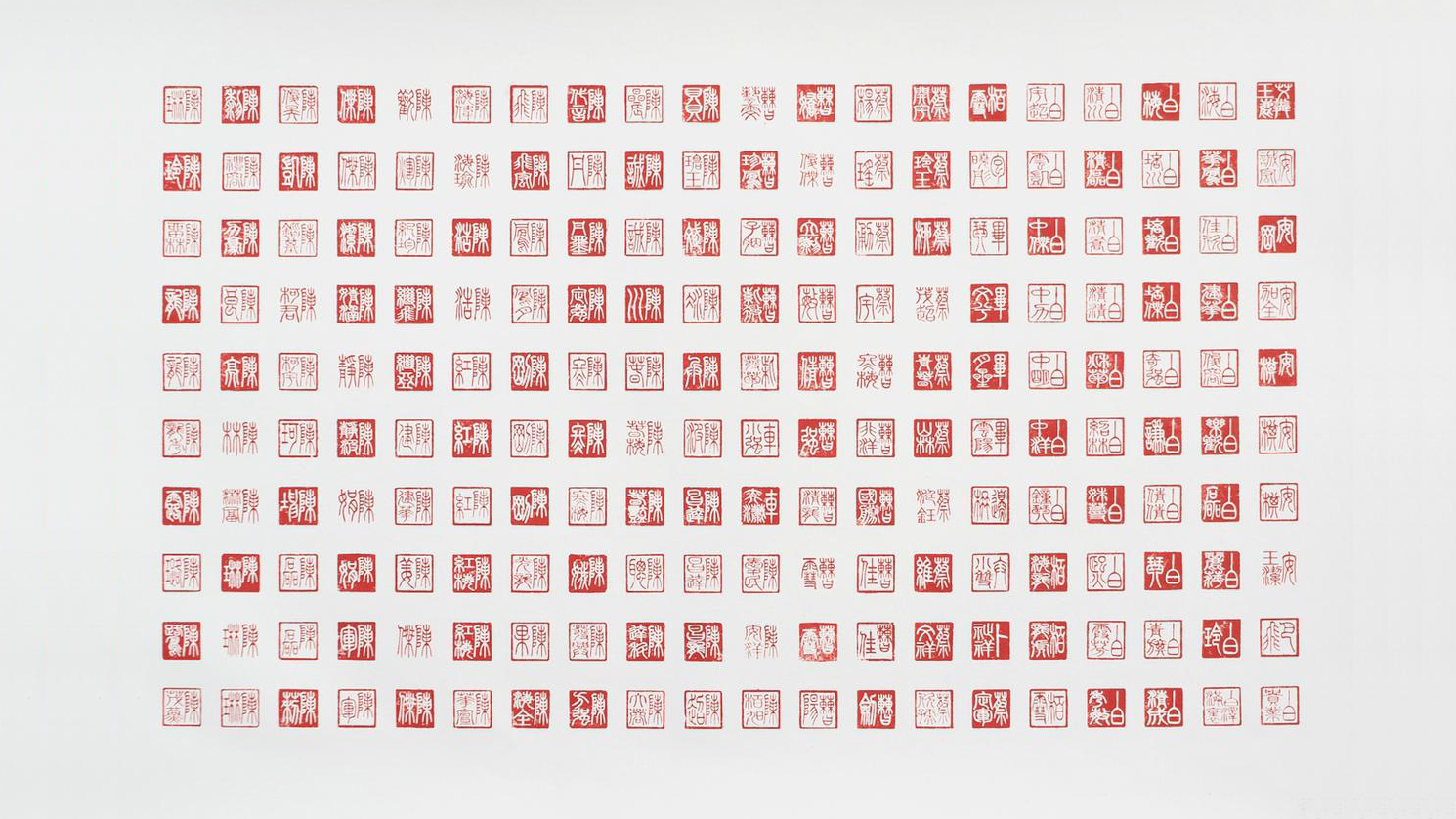 Ai Weiwei, a section of 念念 Commemoration, 2021. These are the seals which bear the names of those schoolchildren who died in the 2008 Wenchuan Earthquake. Image courtesy of Ai Weiwei Studios.

‍[Thank you, Jocelyn, for permission to print the English version of this article. This article was originally published on 3 June 2021 in Korean translation under the title "[조세린 클라크의 문화산책] 희생자들을 기억하는 ‘클럽하우스’의 낭독", in Joongang Ilbo (中央日報). My own reflections and conversation with Ai Weiwei about this project can be read here: Present in the Heart.]

A new by-invitation-only social media app Clubhouse launched last fall, but I did not hear about it until February when I read in the news that the Chinese government had banned it. It was at that moment that it started to become hot. People were auctioning off their invites to the highest bidder on eBay. The next week, a friend in Seoul offered me one of his precious invitations. Busy practicing gayageum for an upcoming performance and preparing my online classes, I had to talk down the little voice in my head that tried to warn me not to drink the elixir of this new river of distraction, into which I was sure to fall and get carried far away from all the things I was supposed to be doing. It’s audio only—no pics, nothing to read, I assured myself. How could it possibly consume me?

I turned in my ticket and soon found myself wandering from audio room to audio room—like dialing through radio stations but always with the possibility of interacting virtually with the person speaking inside. I felt like I was back in graduate school; behind every door, a different group of people from all over the world ardently discussing a variety of topics in various languages, often at advanced levels of expertise. I listened in on conversations between Israelis and Palestinians, famous authors discussing their work with their readers, gugak musicians teaching classical song (正歌), a Korean opera singer putting together a live peace concert for whenever we become fully vaccinated, aging hip-hoppers discussing Snoop’s first albums, and, of course, the usual politicians and pundits and occasional journalist. In one room, I even got to go “on stage,” the place in the app where a visitor to a room can ask the guest of the moderator questions, where I conversed with an expatriated Chinese man who appears in a documentary film made 30 years ago that I show in one of my classes. Despite the ban, elite mainland Chinese with foreign-registered iPhones were still in there, too, cautiously speaking under cover of VPNs. Because it is new and audio only, Clubhouse remains refreshingly free of the mean and the meme, as moderators quickly dispatch the usual disrupters.

One day, I found myself in a room with the exiled Chinese artist, Ai Weiwei (艾未未). He was discussing logistics for a new Clubhouse project called Niànniàn (念念). Now in possession of a few precious invitations myself, I immediately sent one to my friend, the artist Ian Boyden, with whom I studied Chinese at Wesleyan University in the U.S. and at Nanjing University in China between 1988 and 1991. Ian had curated an exhibition titled Ai Weiwei: Fault Line at a museum on San Juan Island, off the coast of Washington state, back in 2016. At the time, I happened to be visiting family in Alaska, so I decided to stop by for the opening on my way back to Korea, hoping to meet the artist himself in an intimate setting. Following the Fairweather and Queen Charlotte Fault Lines down south along the northwest coast of America through Canada to the Cascadia Subduction Zone by plane, car, and boat, I finally arrived at the tiny San Juan Island Museum of Art on San Juan Island in Washington State. While I did not meet Ai, I was moved by his work and the care and passion with which Ian curated it.

The title, Fault Line, carried a double meaning—first, referring to the 2008 Wenchuan earthquake (汶川大地震) in Sichuan Province and, second, to the bureaucratic failures at fault for the deaths of so many schoolchildren. While most commercial buildings in the area had been constructed to withstand a major earthquake, government-built schools were not; when the quake hit, many collapsed as if built, to borrow a common Chinese metaphor for shoddy construction, “from tofu-dregs” (豆腐渣工程). Over 5,000 families lost their allotted one child that day. The government soon closed ranks to protect those who had cut corners and ignored building codes. Citizens who called for accountability were subsequently intimidated and imprisoned, with some, like Ai Weiwei, severely beaten by police.

Ai’s museum installation on San Juan Island turned out to be an austere array: a list of the children’s names printed on regular white paper and pasted to a wall; a gritty documentary film; twisted rebar reproductions carved in white marble (taken from the same quarry as the marble for Mao’s mausoleum), protected in coffin-like cases. Ian noted at the time, “Placed in a museum, [the exhibition] becomes subversive in its own way. By eliminating all of these material aesthetics, it demands that we wrestle with the content. Our individual apprehension of this information, or emotional response to it, becomes part of the artwork. It might only exist in those moments of apprehension, those moments when perception fuses with understanding.”

After surviving his near-fatal but unsuccessful admonishment, Ai Weiwei went on to create over 20 major projects memorializing the children lost in the quake, including documentaries, videos, sculptures made with materials gathered from the earthquake zone, and, most recently, his expansion of one of the elements of his Fault Line exhibit—the listing of the names, ages, genders, grades, and school classes of the 5,197 lost children—into the Niànniàn recitation project that I found him planning in his Clubhouse room. Through this new medium, the names displayed as space in small font on the walls of the San Juan museum, spanning a length of 12.8 meters and height of 3.2 meters, was turned into time, and would be recited by a diverse group of volunteers continuously for 936 hours. Ai’s Niànniàn began on April 4, Tomb-Sweeping Day, a traditional Chinese holiday for remembering the dead, and continued around the clock for 39 days, until May 12, the anniversary of the earthquake. Another anniversary, that of the Sewol Ferry Disaster in South Korea on April 16, 2014, in which 250 students from Danwon High School in Ansan City died, fell within this time span—again, corners cut, codes ignored, and children lost to malfeasance: wrong orders issued—“return to your cabins and await further instructions”— and tragically followed.

Memorials where the names of the dead are spoken or engraved in walls are not unusual. The names of the almost 3,000 victims of the 9/11 attacks are read out every year in New York by family members over the course of a day. The Vietnam Veterans Memorial in Washington, D.C., and the United Nations Memorial Cemetery Wall of Remembrance (聯合國紀念墓園) in Busan both remind survivors of the deceased through the listing of names carved in stone. What is unusual is for a maker of such a monument to be beaten and exiled for his efforts to make us remember. Ai, who grew up in the Gobi Desert as the son of a poet banished to Xinjiang during the Cultural Revolution, knows how subversive remembering can be, and that reading the names of schoolchildren lost to “natural” disasters and “accidents” is especially dangerous. One Clubhouse reader who had been in contact via phone with Ai was arrested shortly after reading 200 names over a period of 13 minutes. “To not forget,” Ai told my friend Ian, “puts [authorities] in a position of moral accountability where they bear responsibility.”

If we put Niànniàn 念念 into Google, it auto-completes with the phrase “Never forget” (念念不忘). As Ai has explained, “The character niàn 念 is the heart (心) in the present (今).” In Chinese it means to both remember or miss and to read aloud. In Korean, nian, or in Korean, yeom, is more closely associated with Buddhist chant—chanting the sutras, repeating the name of the name Amitābha—Amida Buddha. To yeom in Korea is a religious act. As the final day of reading approached, Ian spoke with the poet Yang Lian (楊煉), who told him, “Reading these names again and again is like calling the ghosts of the dead children out of the darkness of the universe, calling them out of the great memory of the universe.” In Korean, perhaps rather than ghosts, they are reborn as little Buddhas, finally exiting Samsara as they are called.

The Clubhouse recitation of names of children lost in the Wenchaun quake accompanied me in my daily routine over 5+ weeks of early spring, as trees greened and flowers budded outside my windows. Quietly, rhythmically, the reading voices played in the background while I prepared my lectures and while I slept—even as I practiced gyemyeonjo (the sad “minor” sounding mode) on the gayageum. During my now-familiar solitary pandemic dinners, I would turn up the volume and concentrate singly on the names and their meanings. I found myself at times repeating them aloud in the silence hanging between names, duplicating the varied Chinese accents and regional dialects of the mostly Chinese readers as the hours drifted in and out of time zones, from Europe to America to Asia and around the globe again. My echoing voice cracked more than once as I endeavored to pronounce the names with the correct tones, though there was no one around to hear. Over the weeks, the sheer volume of the children’s names began to weigh heavy, layered as they were atop the names of classmates and the parents, grandparents, and teachers of friends and family at home and in Europe who had died during the coronavirus pandemic, not always to the virus—yet more lives lost to unofficial and official misinformation and mismanagement.

At the four-second pace of the Niànniàn recitations, it would take almost 4,000 hours to read out the names of the more than 3.5 million people (at the time of writing) who have died from COVID-19—almost half a year just to say their names. It is a mere fraction of the time it will take those of us left behind to come to terms with their absence.