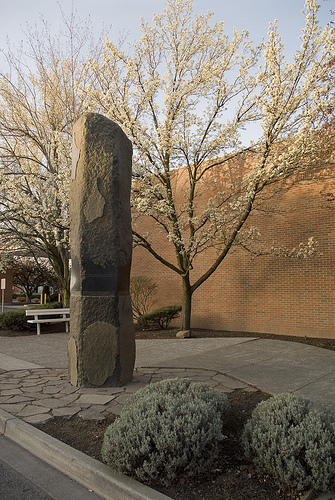 Some years ago, I received a Watson Fellowship to travel to China to study the history of Chinese calligraphy as inscribed on stone.  For one year, I traveled across China encountering ancient stone inscriptions.  I found them on stele, erected in ancient temples and gardens, half-buried in muddy streams, or on raw stones forgotten in deep ravines and on cliffs at the tops of mountains.  I love the way these rocks encounter language and, conversely, how language encounters stone.  Rock and language shape each other, and this relationship shapes us.  Part of this study resulted in me contemplating what might have led these ancient calligraphers to inscribe a word upon a rock, or to in some way bring a stone into the context of writing.  Convergences is a meditation on the interaction of language and stones.

Convergences was produced in collaboration with Jennifer Boyden for the City of Walla Walla, Washington. It is a sculpture that considers the collision of things often thought of as being separate and how we occupy the space between, them such as: earth and sky, child and adult, stone and human, rationality and imagination, light and matter.  This sculpture recognizes the significance of the unity of these elements and reveals ways that the space between them can be understood as the realm that belongs to the imagination. By integrating both the ephemeral (reflections, time, moments of inspired imagination) and the concrete (the stone, bronze, and the location itself), this piece speaks to the remarkable interdependences and resulting coherence of these elements.

Convergences is composed of three elements: a basalt column (approximately 15 feet tall x 36 inches in diameter), two text bands that encircle the column, and a mirror-polished section between the two text bands.  The polished section of basalt can be understood as a horizon line—separating earth from sky, child from adult, the sounds of upper from those of lower, bird from crawling things, and so on. Within this horizon line is reflected the image of the viewer, making the viewer responsible in all cases for bringing the two sides together, either through offering the self as image or the self as imagination. At the same time, the mirror-like finish between the bands text provides an opportunity for the viewer to question him or herself.  While reflective, this band will still retain some of the irregularities of the original surface, and thus the reflection of the viewer will be distorted.  The distortion allows the viewer to see the self in a new way, as if according to the perspective of the column or natural world itself.

This text on the two bronze bands features the beginnings or endings of dreamlike statements that offer an investigation into natural elements of this region. The unfinished nature of these statements invites the viewer to complete the statement, thus making the viewer's generative response of imagination and insight a part of the piece itself. The text of the upper and lower bands loosely corresponds with each other. The act of connecting the two involves bridging the gap between them.  As the gap is a mirrored finish, the viewer again sees the self as a part of what must be encountered in order to make the statements complete.  Thus, the self (as both image/physical being and as generative/creative being) becomes a way to complete the piece itself and, more specifically, the statements it contains.