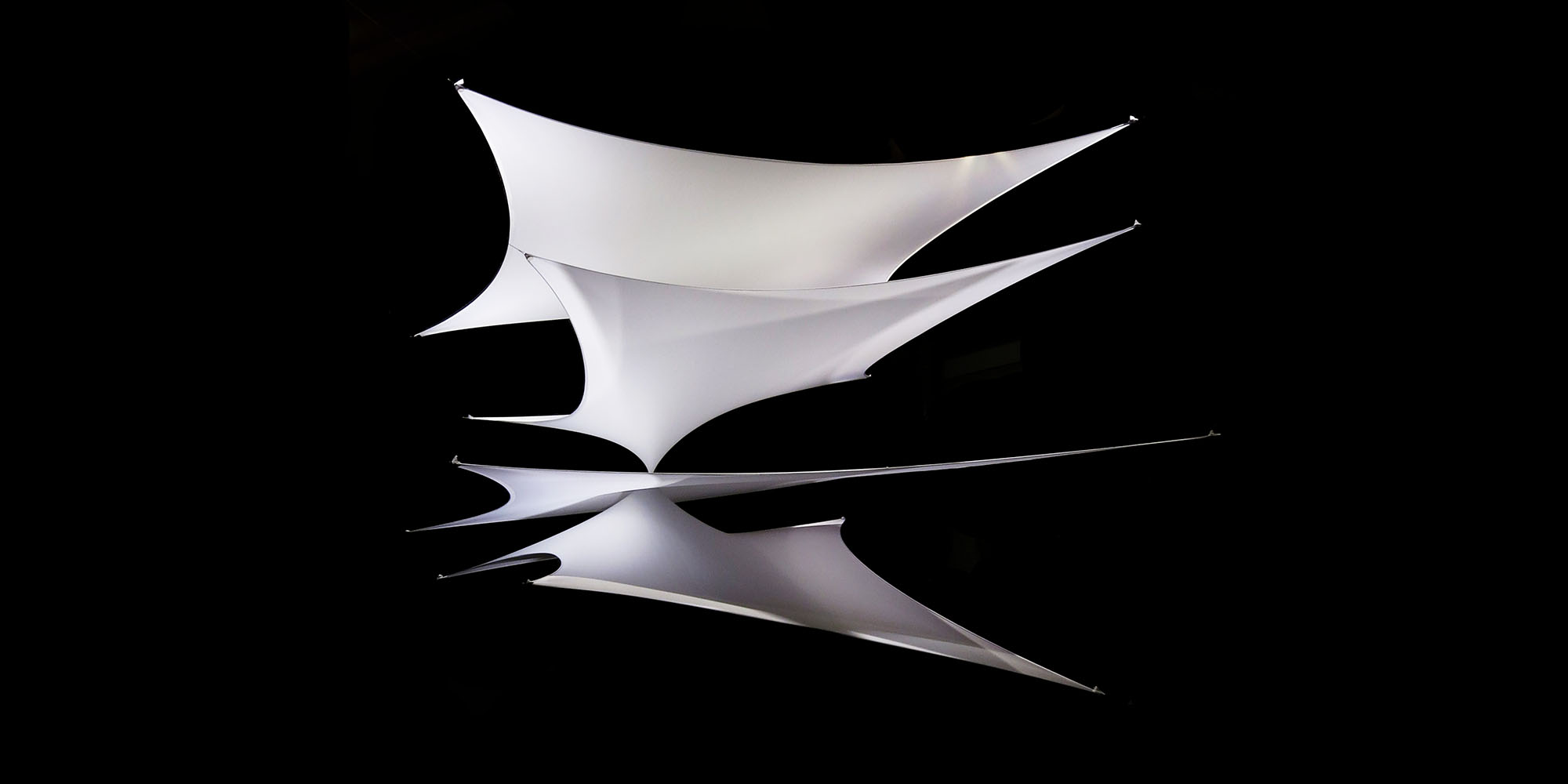 Installation of Manifold at the Jia Yuan, Suzhou China, 2015. Photograph by Ian Boyden.

In the spring of 2011, I asked myself the following question: what would a river's dream look like? And with that I began to make lists of words and concepts as well as a series drawings and paintings exploring possible answers to such a question. I began to try and separate the river into various components: stones, water, flow, sound, algae, insect swarms. And as I did the river became more and more abstract. Soon I was trying to envision the river that we cannot see that flows through the ground underneath the river. And I began to think of the river not as water, but as a resonant body filling the mountain valley with the sound of water's interaction with stone and air. And then it was record of melting snow and the record of the storms that brought the snow. And then each eddy held onto a small bit of subterranean knowledge. And the river became light, an infinity of ever changing reflections—the light breathing in and out of the river in the play of trees' shadows and the arc of sun and moon across the sky.

The question lead me into wholly new territory. I began to experiment with large fabric structures, seeing if I could find ways to suspend stones inside them, ways of giving shape to water's flow around boulders, ways of articulating the scintillation of light on water's surface. I was delighted to find that many of the issues that interest me in my paintings, namely those of momentum, dynamic states, and material relevance, began to find voice in these experiments as well. But unlike my paintings, the nature of these experiments became quite contingent upon the space where they were being built.

I moved to Suzhou, China in August of 2012, to research the history of Chinese inks, and in late November, I was fortunate to find a studio space located in a Qing dynasty Chinese garden called the Jia Yuan. The garden was originally completed in 1774 and its first owner was Bei Runsheng, the great-uncle of the renowned architect I.M. Pei, and remained in the Bei family until the 1940s. During the 1960s and 70s it was largely destroyed. In 2005, it was acquired by its present owners and they began renovations to bring it back to its original state. Today, the Jia Yuan is a rambling set of structures that covers roughly an acre of land in the northern part of Suzhou's inner city. It includes small ponds, rockeries composed of strange stones, banana, pomegranate, and magnolia trees, peonies, and bamboo.

My studio is located on the second floor of a building located near the back of the garden, with a view of a large Buddhist pagoda out of the north-facing windows. I decided to turn this studio into an experimental workshop dedicated to working on this idea of the river's dream and seeing how this idea would be shaped by my experience in China and the Jia Yuan in particular. Over the next three months I began to assemble the materials needed for the project. I sought out steel yards, fabric markets, and hardware stores. As you can imagine the materials I need and the means for describing exactly what I wanted were, for the most part, not part of my Chinese vocabulary. And yet my lack of language actually lead to many discoveries that I might not have had otherwise. By the end of March I finished the first manifestation of this piece.

The installation is composed of multiple layers of thin fabric that are suspended from four steel posts that mark the corners of a square in the middle of the room. The piece suspended from these steel posts thus forms something of an irregular hexahedron measuring a little over two meters on each side and a little over four meters tall at its highest point. These layers of fabric are drawn into tension with each other to create intuitive manifold structures, similar to models of space time and gravity. The work can either be illuminated by the windows along the south and north sides of the space, or from lights located on the ceiling above. The curves of the fabric absorb and reflect light to differing degrees often resulting in unusual illusions. And especially when lighted from above, each layer of fabric filters out a little bit of light from the layer below.

The installation, titled Manifold, morphed considerably over the next several months, at times stretching from floor to ceiling, at other time existing as a single layer of fabric suspended in space. At times it has entered into a dialog with the Buddhist pagoda, at other times it has become an extension of the white walls of the garden itself, sometimes responding to books I was reading, music I was listening to and often in dialogue with the stones of the garden. Just as the river became light in my original contemplations that resulted in this piece, so too this piece eventually became a study in light. I found myself captivated by the way the piece changed under different conditions. I installed shades on all the windows and would open them in various configurations to see what the effect would be. And I became very interested in watching how still and quiet viewers became in front of the piece. Light changed from being a simple requisite for sight, to becoming a material of the work itself. Light became an agent of hypnosis. The subtle shifting of light a subject of meditation.

I eventually installed a light system that I could program to adjust both brightness and color temperature. I set the lights to cycle from total darkness to total brightness over the course of 90 seconds and simultaneously for the light to slowly oscillate from about 2500 to 6500K. This slow pulsation of light creates some remarkable hallucinations (which are impossible to photograph). As the piece enters into darkness the structure itself appears to jump with each twitch of the eye and during the interval of complete darkness the piece appears glows purple, blue, and green, often drifting off to one side or the other only to be brought back to place as the lights begins to return. And after sitting with the piece for some time, one also becomes aware of the shifting perception of light caused by the beating of one's own heart.