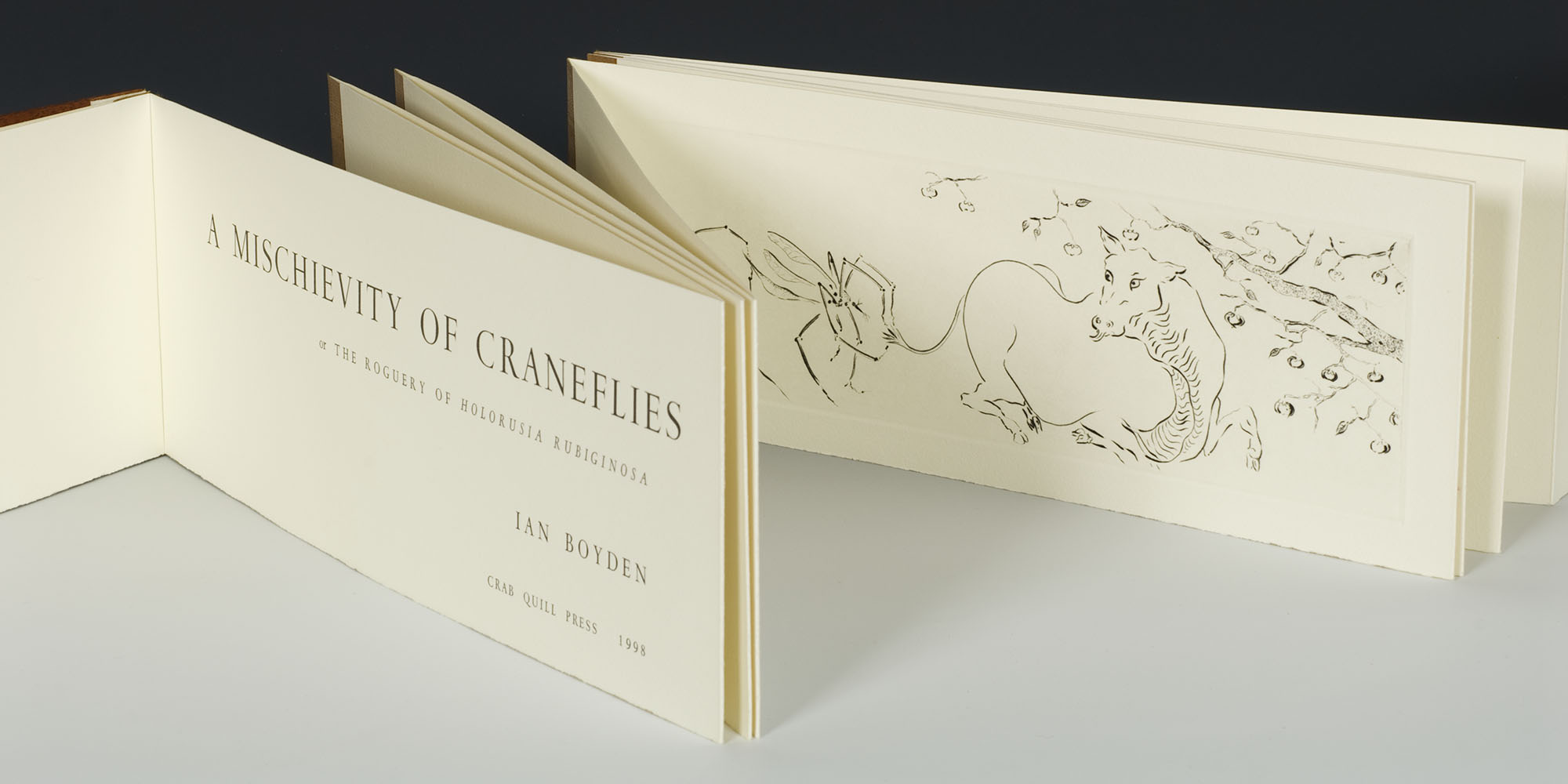 A Mischievity of Craneflies: or the Roguery of Holorusia rubiginosa

Prints and Essay by Ian Boyden

This twenty-four-foot accordion book explores the roguish and calligraphic nature of craneflies. It contains nine copperplate drypoints of craneflies interacting with other animals (each print accompanied by a rigorously playful title) as well as an essay considering the scientific, aesthetic and spiritual aspects of the cranefly. Inspiration was drawn not only from the artist's monumental collection of these insects but also from the 12th c. Japanese satirical animal scroll of the Chōjū-jinbutsu-giga (鳥獣人物戯画, Scroll of Frolicking Animals and People) and the 14th c. scroll Tsuchigumo-zōshi (土蜘蛛草子, Story of Monstrous Spiders). The books are printed on Hahnemühle German Etching, the typeface is Spectrum. The individual folios are bound together with Douppioni silk. The cases are made from rejected guitar backs, the wood being variously padauk, figured maple, mahogany, and Madagascar rosewood. Each book comes in a walnut and cedar slip case. All copies are signed by the artist.

For I Shall Consider the Cranefly

The Cranefly—I say this for the benefit of those unacquainted with the creature in its living, breathing, three-dimensional state—is a remarkable and rather mystical insect. The multifarious names by which the cranefly is known reflect the widespread fascination it holds in the popular imagination: mosquito-eater, mosquito hawk, witch doctor, snake doctor, lawn-chomper, Jersey bomber, bat snacks, daddy-long-legs, and kadiddle-hopper. Taxonomically, the cranefly is a true fly, related to the common housefly, the tsetse fly, and the midge. While most flying insects have two pairs of wings, true flies have but a single pair; the second has been replaced by a pair of gyroscopic stabilizers called halteres, which swing in counter-motion to the wings and allow the insect to control flight movements.

As its name suggests, the cranefly is characterized by extremely long legs. Occasionally, a cloud of craneflies will be rising and falling above a pond or stream. It would profit you to stop and observe, for a cranefly may be inspired to leave the miasmic swarm and fly off on its own accord: then one can see that its front pair of legs extend forward like javelins, the two middle legs hang down like a rudder, and the two hind legs extend backward with certain feminine grace. At the moment of landing, it spreads its legs (all six touching) to form a perfect hexagon. However, by some tragic oversight in the biological blueprint, the moving weight of the cranefly's body is too much for its spindly legs to bear, and it quickly cripples itself. After a few short days, its legs spread every which way, causing it to fly in startling spirals and rest in precarious positions—the legs no longer describe a perfect hexagon but rather lopsided pentagons and quadrilaterals. I will dwell no further on these details than to state that I know of no smaller locus wherein the miracle and pain of existence, mirrored by an entropic descent into geometric abstraction, may be so directly witnessed.  Many winter days I have passed meditating on craneflies and feeling sympathy for what I considered to be a bizarre and, more than likely, isolated entomological anomaly. Imagine my surprise when, after a bit of research, I found that such insects range from the canopies of tropical forest tot he subfreezing arctic ice fields where, it is said, they bounce up and down on the ice! It is with some pride that I inhabit a region that boasts, among sever species, a certain Holorusia rubiginosa, the largest of the craneflies—whose wingspan often exceeds three inches. What a pleasure it has been to find such fine diversity in such an insect that, despite its structural frailties and conspicuous absence from the annals of art history, remains, along with crickets, shrimp, and harvestman spiders, the most calligraphic of the arthropods.