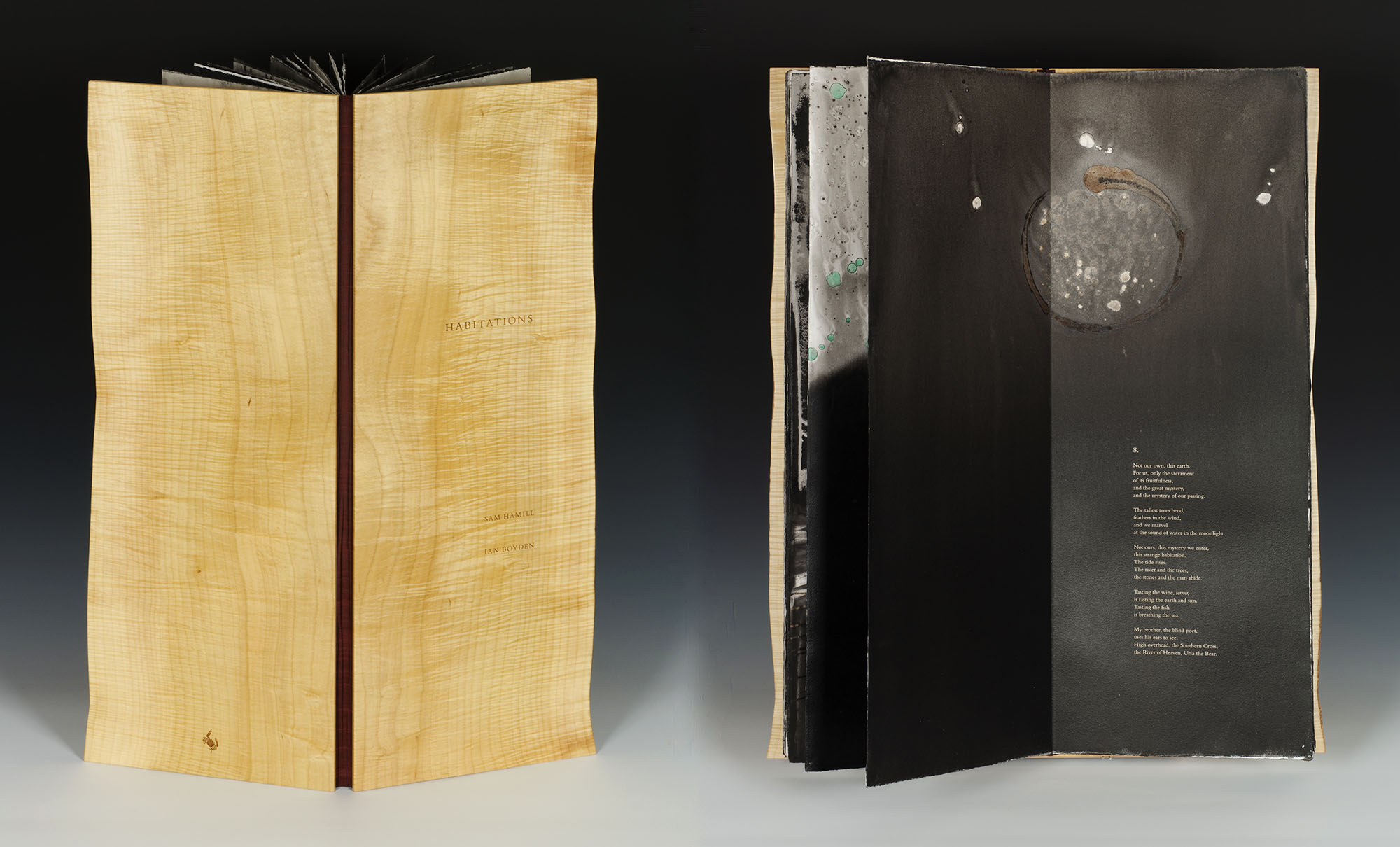 In 2004, I began to correspond with the poet Sam Hamill. One day, I sent him one of my paintings, a thanks of sorts for all of his poems that I have savored over the years. He couldn't decide where to hang it, so it sat at his dinner table for several months as a two-dimensional drinking partner. Eventually, I was the guest at this table, and together we set out to collaborate in paintings and poems. We are both deeply indebted to the art and literature of East Asia, particularly the Taoist and Buddhist thought of China. And so it is in this spirit that we tried our hand at translating moment into word and image, and then translating these into other forms still, and doing so in the voices of languages stemming from words, from animals long vanished, and from the soil we eat from and walk upon. Our exchange began with a painting, and Hamill responded with “Habitations,” a poem that not only addresses the very themes and materials of my paintings but also calls for their extension. Thus, it provided me the rare opportunity to paint into a space opened by the paintings themselves. The collaboration is circular and constantly informed anew.

Habitations appears in an edition of eleven unique copies—each book contains the same text but its own unique set of eighteen paintings. The poem was written in the summer of 2007 in Port Townsend, Washington. The paintings were completed over the course of six months during the fall and winter of 2007–8. All paper is Hahnemühle Copperplate. The book was printed and bound in the spring of 2008 in my studio in Walla Walla, Washington. The drum-leaf binding features covers of silver maple, harvested from a giant tree that fell in the winter of 2002.

Sidereal Heart
A book made of a meteorite
Field of the Sky
A book made of a meteorite
The Oystercatcher and the Pearl Feather
A mythopoetic journey considering the alchemical symbiosis of the oystercatcher and the pearl.
Near To The Place Where They Should Meet
A book of numinous geometry
Segments Along A Horizon
The river, as it flows, resembles the air that flows over it...
Evidence of Night
Dedicated to dreams too far from shore
A Carousel at Birth
A zodiacal meditation
A Mischievity of Craneflies
An entomological dalliance