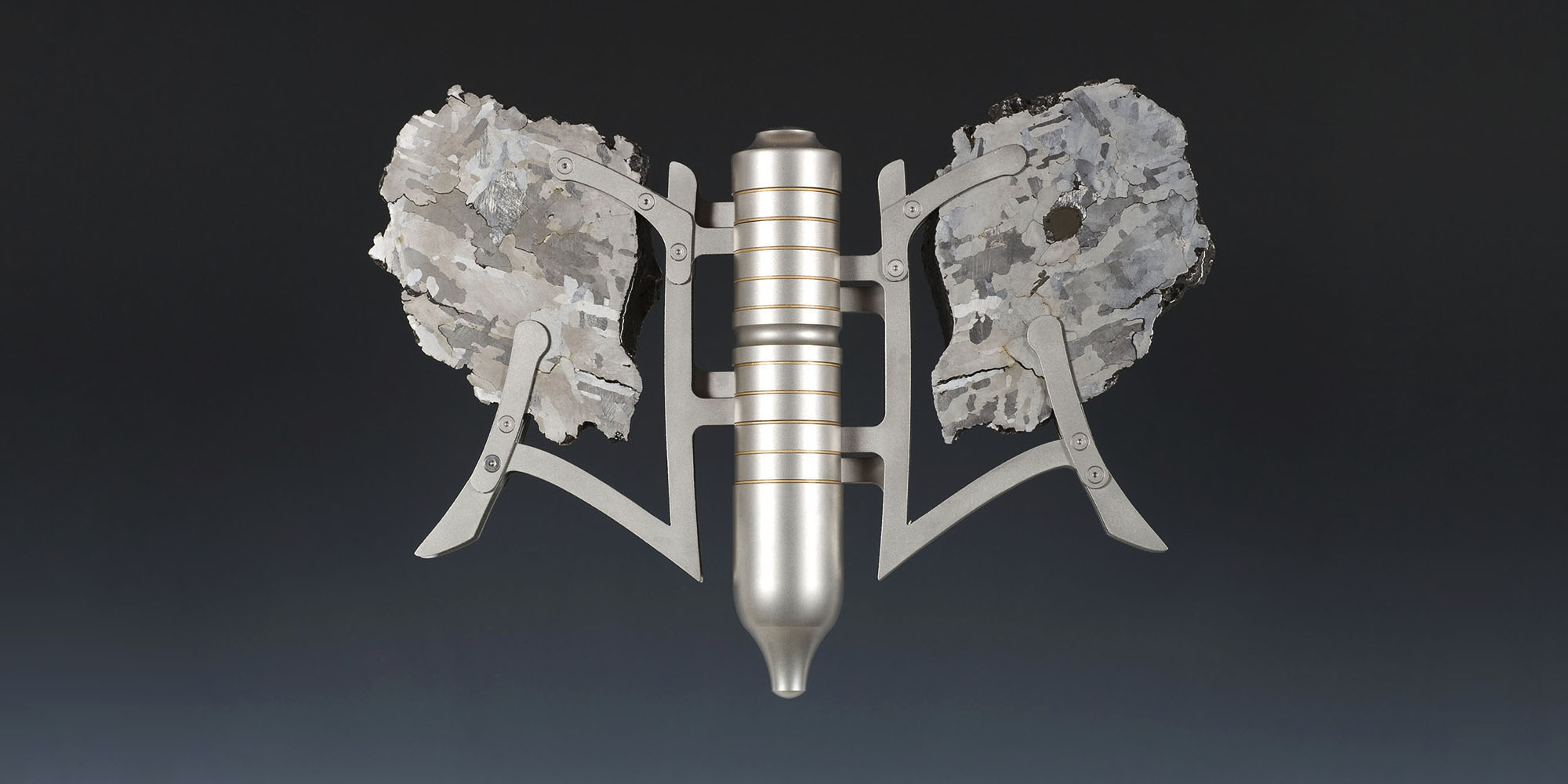 This book is titled Sidereal Heart, after Galileo's famous treatise Sidereus Nuncius (1610), the first book to be written regarding observations made through a telescope.  Where Galileo presented observations of the moon, Jupiter and the stars, Sidereal Heart is made of the very material Galileo was observing. In this case, it presents a magnificent octahedrite, cut into four pieces to reveal the internal metallurgic structures including a large triolite nodule.

Many years ago, I encountered a slice of a nickel-iron meteorite—an object formed at the beginning of our solar system roughly 4.56 billion years ago. It was cool to the touch, surprisingly heavy, and had been polished and etched to reveal metallurgical structures called Widmanstätten patterns.  These are patterns that are only found in meteorites, and only occur when nickel-iron cools at a phenomenally slow rate of 2 or so degrees every million years. Peering closely at these structures, I had the peculiar feeling that I was looking at something that was meant to be read.  This object was like a Rosetta stone from the very birth of our solar system.  It occurred to me to make a book out of a meteorite and present it as an object to be read.  To make it into a book, I sliced the meteorite into thin slabs. I then fabricated a hinge out of stainless steel, which allowed me to bind these slabs so they could be reassembled in the original form of the meteorite. The end cuts are the covers of the book. I polished the cut faces of these end cuts so they would become mirrors in which readers could view themselves reflected in the meteorite. The internal slabs are the pages of the book, which I etched to reveal the Widmanstätten patterns. Bound, this meteorite has become the oldest book in the world.

Field of the Sky
A book made of a meteorite
Habitations
A book with Sam Hamill
The Oystercatcher and the Pearl Feather
A mythopoetic journey considering the alchemical symbiosis of the oystercatcher and the pearl.
Near To The Place Where They Should Meet
A book of numinous geometry
Segments Along A Horizon
The river, as it flows, resembles the air that flows over it...
Evidence of Night
Dedicated to dreams too far from shore
A Carousel at Birth
A zodiacal meditation
A Mischievity of Craneflies
An entomological dalliance