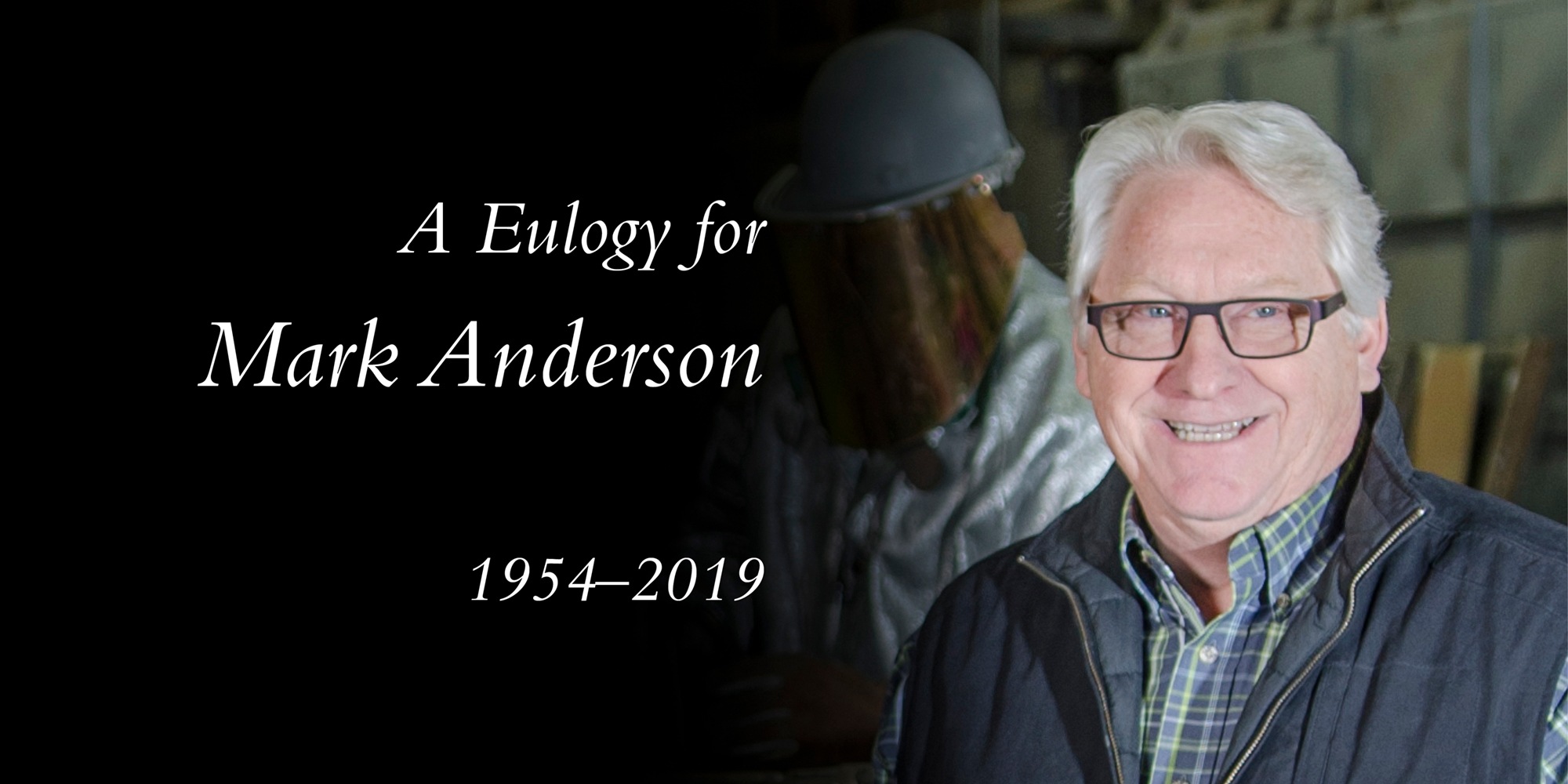 A Eulogy for Mark Anderson

A Eulogy for Mark Anderson

Good afternoon, my name is Ian Boyden and I would like to thank everyone for gathering her today to celebrate the life of Mark Anderson. To Mark’s family, thank you for the honor of sharing a few memories of Mark—my love to each of you. And to the other speakers, thank you for sharing your stories—so many I hadn’t heard before, all these beautiful fragments of his life spinning in the hall tonight, it’s like a mirror ball of Mark—it is so clear he had a profound influence on all of our lives. And the number of us who have gathered in this hall today is a testament to how loved Mark was by this community and to what an extraordinary life he led. Embracing all this, want to share three reflections with you...

Part 1: Conversing with the Stars

I started working for Mark when I was 21 years old. I had been at Walla Walla Foundry for a couple of months, when Mark took me to a huge party at the house of the artist Ed Keinholtz in Hope, Idaho. For the whole evening, I watched with awe as Mark talked with other artists and musicians, gallerists and curators, and art critics and collectors, most of them from LA, talking up the foundry and what he could do, and securing multiple commissions in the process. He was a natural businessman who loved his work, but he was also deeply spiritual.

And it was well after midnight when Mark and I crawled out on the deck and laid down on some mattresses Ed had set out for us. And as we looked up, a giant meteor burned across the sky. We both gasped and then cheered at that trail of light. And before our cry had ended there was another, quickly followed by another. It so happened that the very moment we crawled out on that deck was the heart of the Perseid meteor shower. We watched and we had a conversation with the stars.

At the heart of every foundry is a huge furnace melting metal. That summer, Mark had started me off working next to this furnace pouring molten bronze into molds, an environment that felt mythological, Hephaestean. With that in mind, I noted how the atmosphere of Earth even at that tremendous altitude is also a foundry, what we were witnessing in each flash of light was Earth melting tiny fragments of cosmic iron and pouring them upon us as we lay on Keinholtz’s deck. Mark loved that. And I loved what Mark saw: Mark said he saw traces of our maker in those trails of light.

I’ve often wondered what it would be like to stand on this stage. It’s such a beautiful space, and I’ve seen many great talks and performances here. But I never once imagined I would stand here to remember this dear friend. Another of my cherished memories with Mark actually took place in this very hall. A little over twenty years ago, he and I came here to listen to the poet and Nobel Laureate Seamus Heaney. We sat over there somewhere in the middle and Heaney stood more or less where I am standing, and we heard a poem that night that we would recall for years afterwards. I want to point out that an aspect of grieving involves the suspension of disbelief. So, I ask you now to close your eyes and pretend for a moment that you’re Mark that evening, and that I am an Irish poet. I am going to read that poem. It's titled “Lightenings viii,” and is from the book Seeing Things.

The annals say: when the monks of Clonmacnoise
Were all at prayers inside the oratory
A ship appeared above them in the air.
The anchor dragged along behind so deep
It hooked itself into the altar rails
And then, as the big hull rocked to a standstill,
A crewman shinned and grappled down the rope
And struggled to release it. But in vain.
‘This man can’t bear our life here and will drown,’
The abbot said, ‘unless we help him.’ So
They did, the freed ship sailed, and the man climbed back
Out of the marvelous as he had known it.

All the parts of this story are interchangeable. The entirety of our life on Earth, so rich and varied, held in this poem as brief struggle to free an anchor, a giant bronze anchor. Today, that crewman is Mark. And we are all the monks of Clonmacnoise gathered in this oratory to dislodge the anchor of Mark’s ship, that he might climb back into that other dimension and move on. It is important we all do this together. That is both our wonder and our gift to Mark today.

I know that while Mark was in this world, he saw it as utterly marvelous. One of the things Mark found most marvelous was his family, constantly manifesting in his deep love for Patty, his love for his two children Jay and Lisa, and his love for his grandchildren. When my wife and I had our daughter, Mark and Patty were the first two people to come to the hospital to meet her. They passed her back and forth, smiling and laughing. It was Mark and Patty who welcomed my daughter to the astonishment that is this world, and they welcomed Jen and me to the astonishment of being parents. And so Mark, may you sail on now knowing that you added to the marvelousness of so many lives.

I sometimes wonder what the last word will be that I will hear or read. It is not a morbid meditation, simply one of awe. It could be any word in the world. Each word is a portal into the divine. Mark died while reading a book. Patty found him sitting peacefully in a chair, with his reading glasses on, his hands still resting on a page. The book he was reading was Short Cuts to Happiness: Life-Changing Lessons from My Barber by Tal Ben-Shahar. It was open to this passage (which I’ve condensed):

British psychologist Richard Wiseman searched for reasons why some people are considered to be lucky. Among such people, Wiseman found unusually high levels of openness to external messages: “They are skilled at noticing chance opportunities.” A lucky person will stop and take note of the messages that by chance have crossed his or her path.

I imagine Mark seeing himself in this passage, and thinking, I am a lucky man—that final word “path” lingering there as he closed his eyes for the last time. Indeed, Mark was quintessentially lucky. But his luck was not the product of random fate, or simply noticing chance opportunities. Mark’s luck was the product of his love.

To really understand a person, it is important to identify how they express love. I think Mark’s love language was one of service to others. If you regard him from that standpoint, he was spilling over with love. He was a wellspring of love that left traces all over our world—sculptures, civic engagement, guiding his children, conversations under the stars. I know that many of us here today would not be who we are were it not for Mark. Were it not for Mark’s love.

To Mark, my deep respect and thanks. You were a great part of my life and I am really going to miss you. And to Patty, Lisa, Jay and Kelsey and your kids—my love to each of you. Really, my love to everyone here.

Naturalist – or Alchemist?
Essay by Richard Barnhart
Not Yet Not Yet Complete
An Interview with Ai Weiwei in China Heritage
Eulogy for Tom Crawford
2019 NEA Literature Translation Fellowship
To translate the poetry of Tsering Woeser
Ian Boyden, Ch'ung-ho, Peach Blossom Fish
Embryonic Stars: The Books of Ian Boyden
Suyama Space | 1998–2017
A catalogue of a visionary installation space in Seattle, curated by Beth Sellars
basalt: a journal of fine and literary arts