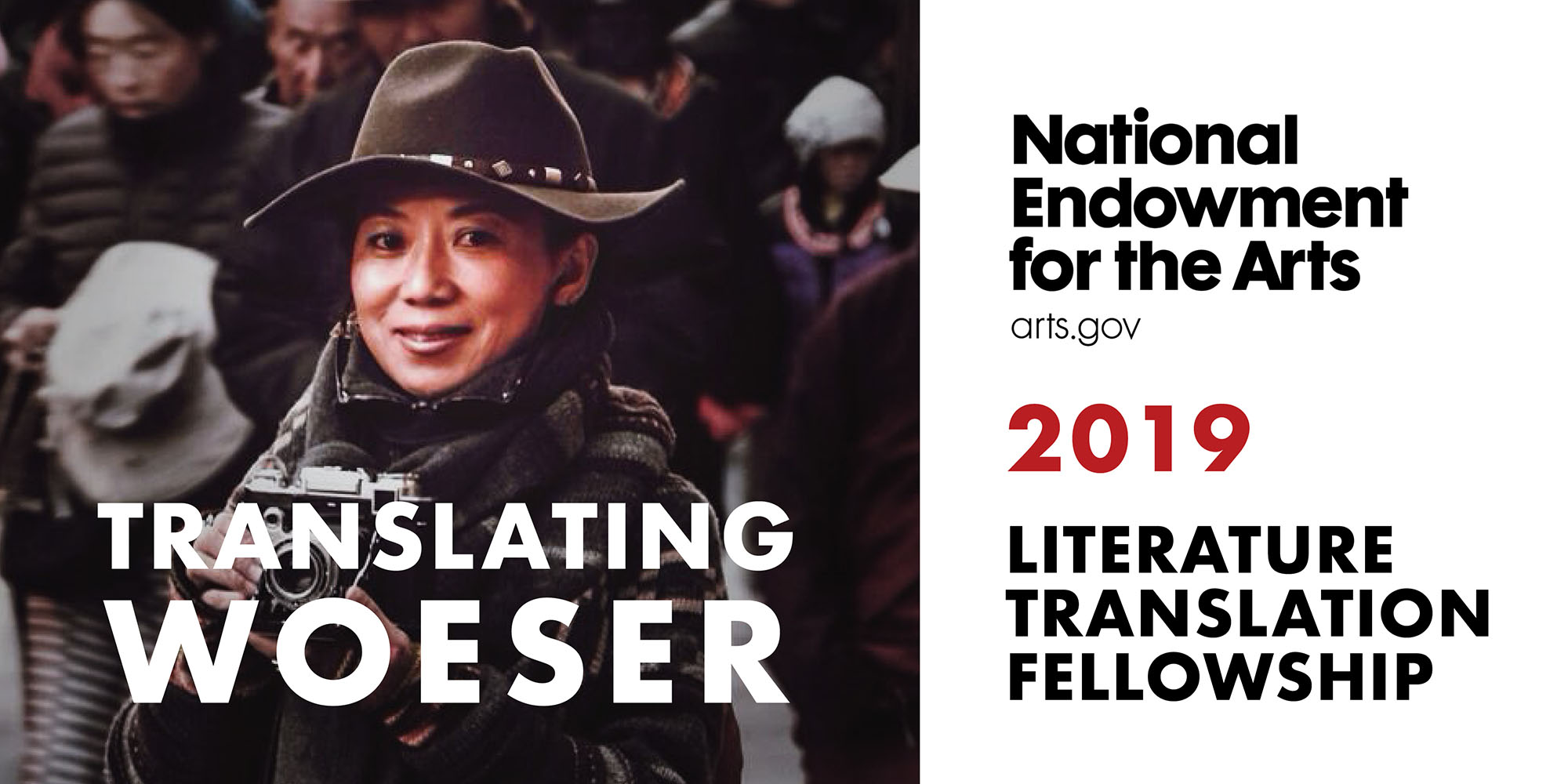 from the National Endowment for the Arts

Fellowship will support the translation into English

of the poetry of Tibetan-Chinese writer Tsering Woeser

The fellowship is being awarded to support the translation from the Chinese of the poetry collection Minority by Tibetan poet Tsering Woeser. Woeser (b. 1966) is considered one of China’s most respected living Tibetan writers. Her Tibetan heritage is central to her work, whose themes include alienation due to the ongoing and often violent erosion of Tibetan culture. Minority is a 120-page collection comprising roughly 35 poems.

The translation is particularly complex, as Woeser is conveying the Tibetan experience using Chinese language. As a young girl in the Cultural Revolution, Woeser was “re-educated,” meaning Chinese was taught in schools to replace the mother tongue. Her poems confront sensitive topics such as the wave of self-immolation that has swept through Tibetan society in the last decade, and the destruction by the Chinese government of Larung Gar, the largest Buddhist academy in the world. John Kerry of the U.S. State Department gave Woeser the International Women of Courage Award in 2013. In 2010, she was also was honored with a Courage in Journalism Award from the International Women's Media Foundation. A human rights advocate, Woeser has been under intermittent house arrest for the past several years, and was only recently allowed to return to her Tibetan homeland for a limited time.

Ian Boyden is a translator, writer, artist, and curator. His translations of Woeser's work have been published on leading human rights and Tibetan cultural websites, including Radio Free Asia, Invisible Tibet, and High Peaks Pure Earth. His translation of her poem “The Spider of Yabzhi Taktser” was declared the most-read translation of a Tibetan poem in 2017. Boyden studied for many years in China and Japan, and holds degrees in the History of Art from Wesleyan University and Yale University.

Asked how his interest in Woeser’s poetry developed, Boyden says, “My friendship with Woeser started in an unusual way. Several years ago, I carved a huge self-portrait out of wood, and when I finished carving it, I lit it on fire, thinking it was a statement about forest fires here in the Pacific Northwest. Instead what I saw burning before me was a statement about self-immolation. So I wrote to Woeser, who had written a book titled Tibet on Fire about the huge number of self-immolations that have occurred across Tibet in recent years in protest against the Chinese occupation of that country. To my amazement she wrote back to me.” That conversation continued, and they still write to each other several times a week.

Of their work together, Boyden states, “Woeser’s voice is incredibly important, unique, prescient. There is an urgency in translating her work. As a poet and humanist, I take great pleasure in translating Woeser’s complex poetry and making her spirit and voice come alive in another language. I have been doing this work uncompensated at the edges of my days whenever I can find a slice of time. Receiving an NEA fellowship affirms the significance of this endeavor. I am very grateful for the time, support, and recognition the award will provide, as well as the opportunity to share Woeser’s poems with an English-speaking audience.”

“The National Endowment for the Arts is proud to support these 25 new projects, building on more than 35 years of funding literature translation,” said NEA Acting Chairman Mary Anne Carter. “Translation not only provides American readers with access to many of the world’s most talented and respected writers, but through the skill and creativity of the authors and translators, readers can explore new and often unique perspectives and experiences.”

Since 1981, the NEA has awarded 480 fellowships to 425 literary translators, with translations representing 69 languages and 83 countries. The review criteria for these projects consist not only of the translators’ skill, but also the importance of a particular work to English-speaking audiences, including those authors and languages that are often underrepresented.

Click here for the full list of fiscal year 2019 Literature Translation Fellowships, along with information about the translators and their projects. (Please note these awards are pending Congressional approval of the NEA’s fiscal year 2019 budget.)

Links to some of Woeser’s poems translated by Ian Boyden: “Rebirth: Dedicated to Liu Xiaobo,” “White Cranes,” “Heavy Curtains and Deep Sleep Within Darkness,” “Flames of the Homeland,” and “The Spider of Yabzhi Taktser.”

Established by Congress in 1965, the National Endowment for the Arts is the independent federal agency whose funding and support gives Americans the opportunity to participate in the arts, exercise their imaginations, and develop their creative capacities. Through partnerships with state arts agencies, local leaders, other federal agencies, and the philanthropic sector, the NEA supports arts learning, affirms and celebrates America’s rich and diverse cultural heritage, and extends its work to promote equal access to the arts in every community across America. For more information, visit the NEA at arts.gov.

Naturalist – or Alchemist?
Essay by Richard Barnhart
A Eulogy for Mark Anderson
Not Yet Not Yet Complete
An Interview with Ai Weiwei in China Heritage
Eulogy for Tom Crawford
Ian Boyden, Ch'ung-ho, Peach Blossom Fish
Embryonic Stars: The Books of Ian Boyden
Suyama Space | 1998–2017
A catalogue of a visionary installation space in Seattle, curated by Beth Sellars
basalt: a journal of fine and literary arts