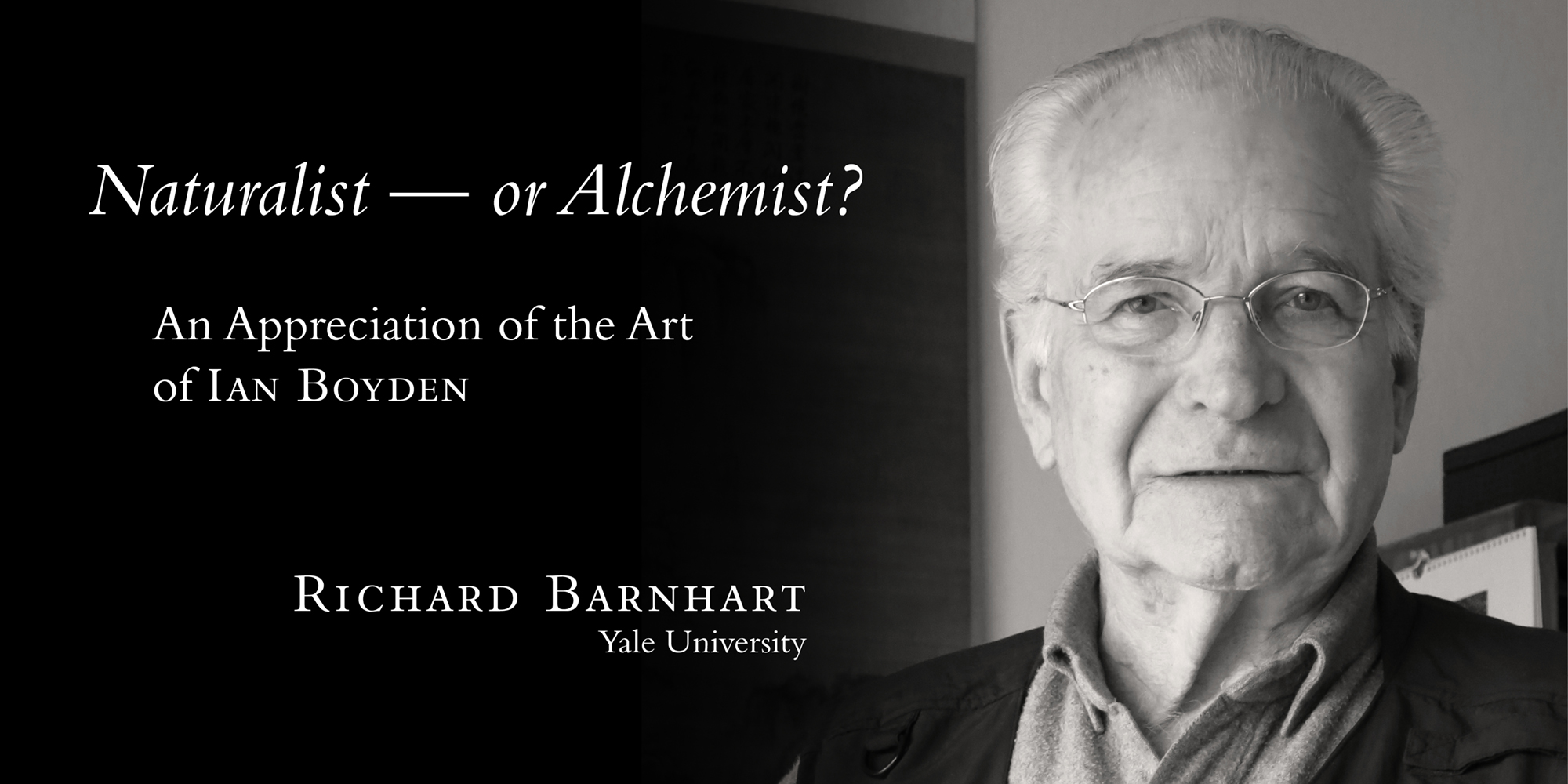 An Appreciation of the Art of Ian Boyden

As an art historian I study art from the standpoint of historical eras and styles, biography, influence, techniques, and traditions. None of this is very helpful in approaching the art of Ian Boyden.

Of course, his life is interesting and unusual, and is his alone—and I expect that he will one day write about it all in the deeply reflective, poetic, and adventurous way he goes about living. And he does live in an interesting time, a time in which many artists seek to create art of out natural materials and living forces, to gently, temporarily modify natural elements and places into artworks that illuminate the beauty of nature and the creativity of humankind, that encourage us to work to sustain our environment and protect the earth. Influences on Boyden range from Paleolithic cave painting to his father Frank Boyden’s sculpture and printmaking and the transfer paintings of Mu Xin; from the interactions of meteorites with the earth to Dong Qichang’s use of brush and ink; from the movement of wind and air to the forces of water, fire, and ice. From these, and perhaps a thousand more sources throughout the world and across time, he has invented his own techniques and created a new tradition.

Boyden makes his own materials from dirt and rocks, from burnt forests and meteorites, from animal bones and bamboo. He is inspired by rain-stained walls and footprints in the sand. He loves trees, rocks, mountains, rivers, oceans, and tornadoes. The sun, the moon, the earth, the planets, dead stars, and the inconceivable infinity of cosmic existence find their way into his art—naturally, like the lightness of being. The beauty of his art lies in the ways he gently coaxes out the experiences of a roaming mind into graphic form, as images, so we can all see what he has found in the dirt.

Boyden’s art offers many shapes, textures, materials, and mediums, from a piece of cloth drifting in its own world of wind and light to a black sea of ink and glue in which the very origins of the cosmos seem to brew. Writing a concrete physical description of any of his paintings would be a thankless task, for each one is richer, more nuanced, more expressive, more complex in organic, unpredictable ways than words can convey. His own precise, detailed descriptions of the many processes by which he makes his art are fascinating in themselves, and are also helpful in understanding how his images come into existence. But the best approach to his art is to stand in front of it and let its own organic qualities of texture, form, movement, color, depth, space, and atmosphere emerge in themselves, as experience: the elements will begin to seem alive, to create their own unique world. Boyden’s paintings do not need or even benefit from description, and in the company of his sculpture they take on an even broader dimension, as light as air, as hard as stone, as organic as dirt and human flesh.

The old Chinese term fengliu (風流), whatever it may mean exactly besides “wind and flow,” has served to characterize many diverse art forms over the centuries, including the flowing lines of Gu Kaizhi’s drapery and Wang Xizhi’s calligraphy, the spirited horses of Zhao Mengfu, and the elegant court ladies of Tang Yin. Boyden’s art seems to be the very essence of fengliu: the physical work of art before us, the materials of which it is made, the processes through which it took shape, the hands of the artist, the visceral impact on our physical senses, and the common human memory and shared experience of life—all become a single thing, indivisible. His art literally evokes the flow of wind and water, of ink and water, of liquid into solid, of color into form, of raw matter into image. It engages us with the same soft touch as the air, the earth, or a human hand—and with a style, elegance, freedom, exuberance, originality, and insatiable creativity that belong only to Ian Boyden and the artistic world he is living in and forging every day.

A Eulogy for Mark Anderson
Not Yet Not Yet Complete
An Interview with Ai Weiwei in China Heritage
Eulogy for Tom Crawford
2019 NEA Literature Translation Fellowship
To translate the poetry of Tsering Woeser
Ian Boyden, Ch'ung-ho, Peach Blossom Fish
Embryonic Stars: The Books of Ian Boyden
Suyama Space | 1998–2017
A catalogue of a visionary installation space in Seattle, curated by Beth Sellars
basalt: a journal of fine and literary arts