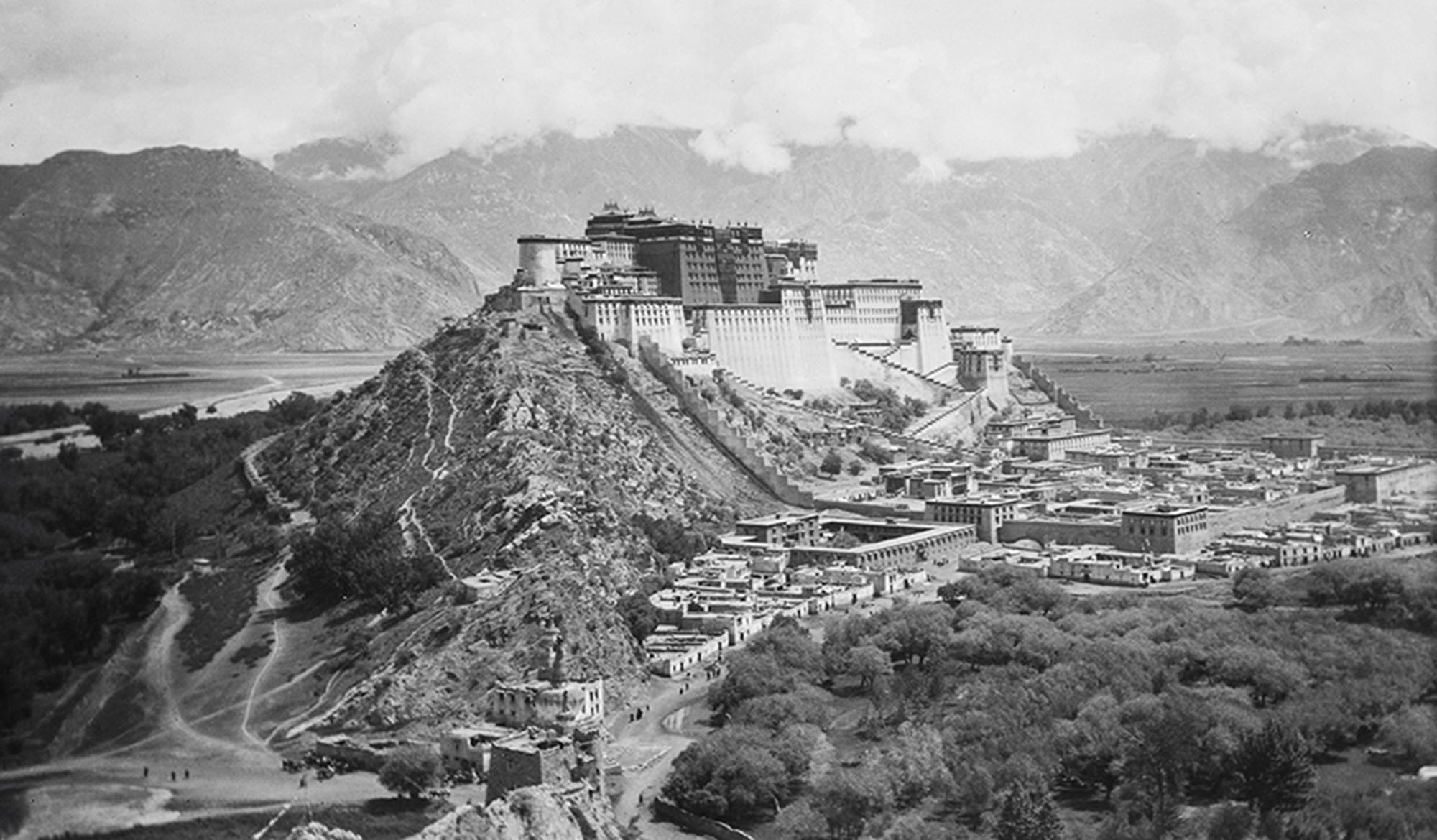 Empty, or Not Empty

The Dalai Lama's dharma-throne—the Potala Palace. The date of this photograph is unknown, sometime between 1900–1940. During this period, there were Russians, British, Germans, Austrians, etc. who took photos in Lhasa.

[This poem is published on the occasion of the 60th anniversary of the Tibetan uprising, March 10, 1959.]

Empty, or Not Empty

—dedicated to the Dalai Lama on his 82nd birthday

Have you heard of the Shukti Lingka?

In the past, the Shukti Lingka spread out

before the Potala Palace, lush and verdant,

and mirrored in the ponds crossed by small bridges.

A little ways away stood a stele,

recording imperial deeds of a thousand years ago.

The dharma-throne in this park

must have been made with layers

of the flattest possible stone.

There would have been tufts of grass growing

from the crevices, and flowers would have bloomed,

and then even more bouquets of flowers

would have been left on the seat by visitors

who came from near and far,

the fragrance permeating every corner.

This vision, from my own imagination,

matches the memories of the older generation.

A few years ago, I was brought to this spot

by a son of old Lhasa royalty, a handsome man

with a shallow karmic reward.

He couldn’t bear the sight, covering his eyes,

he looked out through his trembling fingers

pointing through tears to where the throne had stood.

All vestiges of that park had been obliterated.

And loudspeakers, large and small, blared

songs of propaganda. The melodies were old,

but the lyrics had been changed.

That honorable dharma-throne, which existed before March 1959—

How did it disappear? What kind of story did that throne have,

always left vacant to wait among the trees and flowers?

I have asked so many people: Have you heard of the Shukti Lingka?

A retired official from the local television station burst into tears

He asked, Can you understand what it feels like

to miss your cherished memory?

Have you tasted the flavor of heartbreak?

And he told me this memory from before the occupation:

In those years, His Holiness was a mischievous teenager.

People eager for a blessing would pass by

and could not help but raise their heads,

and see the young Gyalwa Rinpoche[4] sitting on the throne,

There is no way he could forget this sight,

one could not forget over the course of an entire lifetime.

I continue to ask in a low whisper: Have you heard of the Shukti Lingka?

who was born in a farmer’s house

near the hometown of the great Songtsen Gampo.[6]

He had a great talent for painting,

and was able to depict our lost paradise

in ways I’ve never seen before.

Among his paintings, one stood out: one of the last

paintings he completed just before his unfortunate death:

white clouds, a few houses that no longer survive,

and there, right in the center,

Five lilies bloom in the middle of the night.

At this late hour, when one is able to witness

the most beautiful moments,

I want to make this offering:

lilies in a simple glass vase placed in front of a photograph.

There are some rooms, no, there are many rooms,

where even this photo is not allowed.

In this world there are people who are afraid

of a photograph. What kind of people are they?

In their dense fragrance,

I prostrate myself in prayer.

At least this room is no longer empty.

I have seen many empty rooms

in the Jokhang, in the Norbulinka, in the Potala Palace.

The honorific word for one of these rooms is: Gzim Chung.[7]

One day, I encountered a monk I had known for many years.

He showed me a single key with a mark on it

attached to a large ring of keys.

Looking around and seeing no one,

we lowered our heads and entered a room

The smell of incense was thick, as though covering up another fragrance.

I did my best to identify it, as if searching the past

for a silhouette of one who could not bear a heavy burden.

The silent monk pulled me back to reality, and with his eyes indicated

a wall painted with images of bodhisattvas and other beings.

The images were written over

by the fierce scratches of a bayonet.[8]

In front of the empty dharma-throne, a white khata

and a few complete Kashag banknotes.[9]

A few days ago I was sent a song

“Under the sun, the child of yesterday leaps and frisks about.

He grinds groups of planets into pigment,

and uses the pigment to draw tomorrow—

he takes all of his problems and casts them to other people,

but the world is deaf and mute, it doesn’t make a sound…”

I think of a famous temple in the northern district of Kang.

If you open that door that is not known to others,

you will shed tears at everything you see:

on a beautifully carved sandalwood bench,

all kinds of offerings, each carefully selected.

And inside that room, in the warm light of a crystal lamp,

a pair of golden slippers in front of a pure white bathtub.

Every time I stand here,

I am “surrounded by a strange fading landscape”[11]

in my innermost heart

there is a voice that refuses, that rebels.

If we are to achieve a reverse of course,

we must do it as soon as possible,

otherwise it will truly be too late.

I think of the deep autumn of that year.

Wait—no, it must have been early winter.

We carried a few strands of prayer flags,

a bag of powdered bsang to burn like incense,

some freshly ground barley, a bottle of barley wine.

We walk slowly along a ridge 4000 meters high,

our hearts beat faster and faster.

Before the Rinpoche left, he exhorted:

You must not talk, must not yell.

Sit down, pray that you may see the future.

To one side is the sunny slope, where sunlight bestows a little warmth;

the other slope is shady, covered with a shallow snow.

Lhamo Latso.[12] This holy lake is the crown of the Buddha,

a pure mirror held by this U-shaped valley.

Filled with power, it’s so vivid it seems unreal.

Not a soul around its edges. Only me and my lover.

First, I offer the bsang and barley wine to Palden Lhamo.[13]

Then I tie prayer flags between the stones

which convey our wishes and our prayers.

We sit down, separate from each other,

not interfering. I focus my mind and gaze at the lake:

“Please grant me a vision of my fate.”

One lands to my right, one to my left:

I glance back toward an un-ravenlike cry

and a voice within the vision says,

not a bad omen.” The ravens pace back and forth.

They caw occasionally while I continue to gaze.

Gradually, an image emerges from the lake,

her smile is familiar in its compassion:

a vivid miracle, outside the realm of words.

When the sky grew dark, we returned hand in hand

to that city which has been empty for decades.

Along the way, two deer ran lightly by

as though we were within the Kalachakra mandala.

Could this be the case?

Like so many of my people who have returned—

my heart is not empty. It is filled with love and hope.

[2] The Lhasa Zhol Pillar (ཞོལ་རྡོ་རིངས་ཕྱི་མ་) was erected in the late eighth century and describes deeds of the Tibetan Empire. It is also one of the oldest surviving examples of Tibetan script, a writing system attributed to Thonmi Sambhota, who was a minister to the founder of the Tibetan Empire Songtsen Gampo who is mentioned later in the poem (see note 6).

[3] The Shukti Linka was destroyed in 1965. The park and its wetlands were drained and filled, then covered with concrete and turned into what what was then known as the People’s Cultural Palace Square (人民文化宫广场). This square was subsequently renovated in 1999 and renamed as Potala Square. In 2002, it became the site of the monstrous Monument to the Peaceful Liberation of Tibet, a 37-meter high structure commemorating the PLA liberation of Tibet in 1951. And in 2005, it was once again renovated to its current state.

[4] Gyalwa Rinpoche is one of the honorific names of the Dalai Lama.

[5] Choenyi Jampel (ཆོས་ཉིད་འཇམ་དཔལ་) was a very promising young artist in Lhasa. He was tragically killed in a car accident on March 29, 2011. He was only 30 years old.

[6] Songtsen Gampo (སྲོང་བཙན་སྒམ་པོ) was an early 7th century king. He is credited with founding the Tibetan Empire and introducing Buddhism toTibet.

[8] In the past, the Dalai Lama would stay at the Jokhang during the Buddhist ceremonies celebrating the New Year. He had a special room, which was known as Gzim Chung. During the Cultural Revolution, this room was occupied by Red Guards, members of the Opposition Party, and the People’s Liberation Army. During this time, the murals in this room were scratched by bayonets, and these scars exist to this day.

[10] The song is titled “Empty Room” and is sung by the Tibetan Patient Band (西藏病人乐队).

[11] This is a line from the poem “For the Egyptian Coin Today, Arden, Thank You" by Raymond Carver.

[12] Lhamo Latso (ལྷ་མོའི་བླ་མཚོ།) is the most sacred lake in Tibet. This is the lake where visions are sought for the reincarnation of the Dalai Lama and is presided over by the the Dalai Lama’s guardian goddess Palden Lhamo. It is located Gyaca County, Lhokha Province to the southeast of Lhasa.

[13] Palden Lhamo (དཔལ་ལྡན་ལྷ་མོ།) is the primary goddess of protection in the Tibetan Buddhist Pantheon and is the guardian god of Tibet, Lhasa, and the Dalai Lama.

[14] Srungma (སྲུང་མ། ) are protectors of the dharma, also known as dharmapālas.

[15] Chenrézik (སྤྱན་རས་གཟིགས།) is the Tibetan name for the bodhisattva Avalokiteśvara.