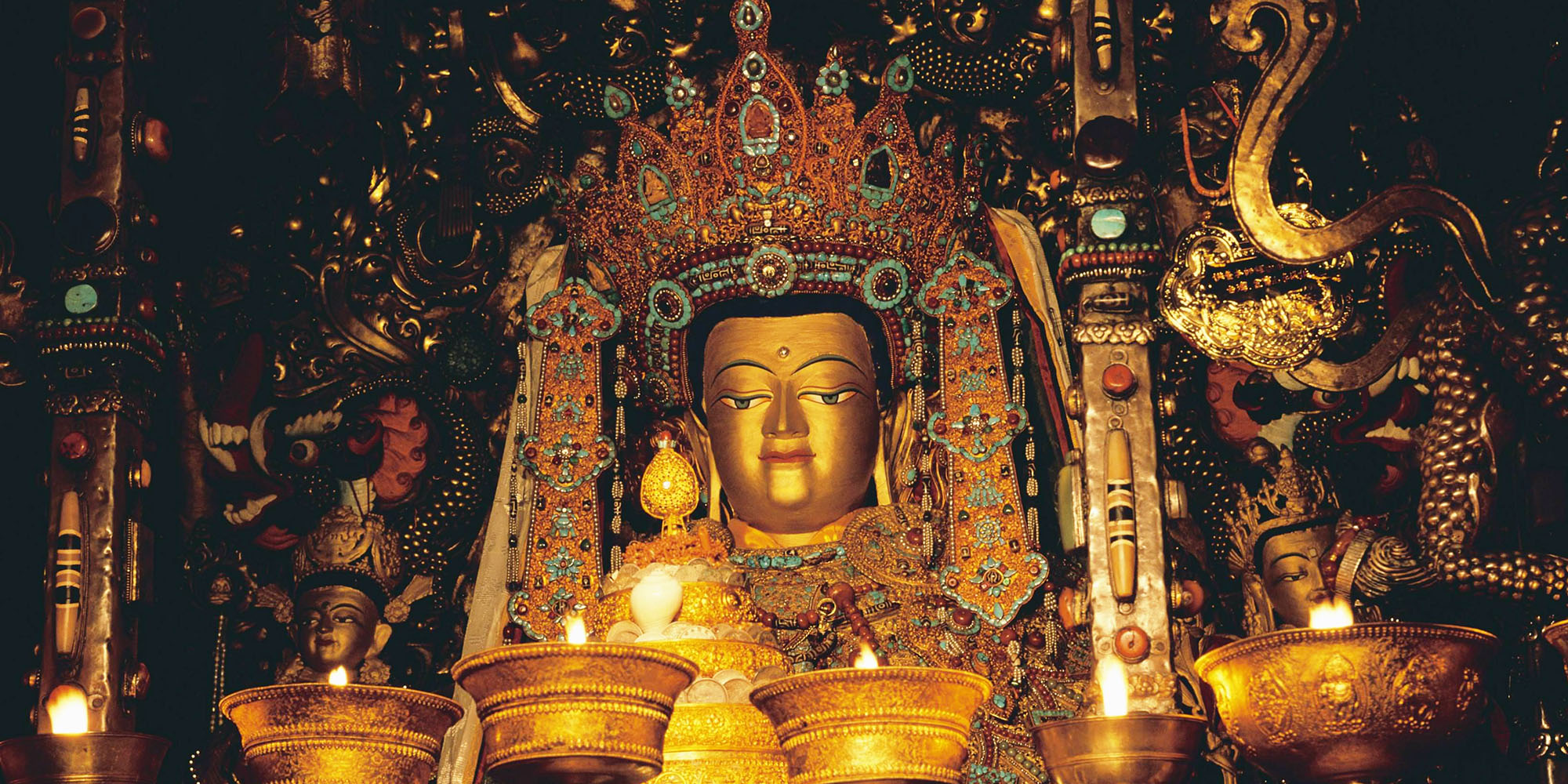 cross-legged in the seething

and ardent chaos of fire.[2]

No time to write a poem, cry,

or even allow me to search for the countless treasures

behind those hurriedly hung curtains,

even though the ultimate truth

as personally manifested by Jowo Rinpoche.

Those heavy curtains are a metaphor.[3]

On the second day after the fire

they took a piece of yellow silk

almost without a wrinkle,

cut without a trace,

and draped it behind what was reportedly

Who knew what was behind it?

Or what could still be there?

Those who persevere, you actually know

that invisible fire has been burning unabated,

and those heavy curtains

One can not but sleep deeply within darkness.

One can not but rely on a dream[6]

in deep sleep within the darkness….

It’s like these words (was it me who said them?):

“You may think there is darkness in this world,

but in fact, darkness does not exist.”

And so, you can try and describe

as well as the flash of light,

that time the light extinguished

did you see it?

as well as the flaming light,

that time the unquenched light

did you see it?

Suppose there is no eternal light, then what?

Suppose there is not a single ray of light, then what?

And how, in this endless bardo,

can one be spared

the invisible temptations[7] of every wrong turn?

A single drop of water falls on the eyelid

of the one who is fast asleep.

A single teardrop in the darkness laments

the death of the soul that lost its mind.

But some people say, as if in the whisper

of a country a lifetime ago:

“If you want to know how much

darkness there is around you,

you must sharpen your eyes,

peering at the faint lights in the distance…”[8]

[1] Jowo Buddha: the primary Buddha of the Jokhang Temple in Lhasa. It is said to be an image of of Shakyamuni when he was 12 years old. The sculpture is also called “Jowo Rinpoche.”

[2] On the evening of February 17, 2018, a fire broke out in the main hall of the Lhasa Tsuklakhang, also known as the Jokhang, the most sacred site of Tibetan Buddhist world. News of the fire was suppressed by Chinese authorities, and this tragedy went virtually unnoticed by Western media. In her note to me the next day, Woeser wrote, “It is like my heart has been cut by a knife, last night my Buddha was bathed in fire.”

[3] Woeser writes: “Darkness is a symbol of fear, the curtains are a symbol of falsehood.” Personal communication, March 10.

[4] Body: Within the Tibetan tradition, certain images like the Jowo are rarely referred to as “statues,” instead they are living images and are often referred to as “bodies.” An in-depth discussion of this phenomenon can be found in Cameron David Warner's essay "A prolegomenon to the palladium of Tibet, the Jowo Sakyamuni," found in Lo Bue, Erberto, ed. Proceedings of the Tenth Seminar of the IATS, 2003, Volume 13: “Art in Tibet : Issues in Traditional Tibetan Art from the Seventh to the Twentieth Century.” Leiden, NLD: Brill, 2011.

[5] To this day there has not been confirmation of exactly which buildings burned, what rooms, nor what was lost and damaged in the fire. Details of the event have been obscured by a wave of misinformation. Woeser quickly noted that the official photo released by the Chinese authorities showing the Jowo intact had some significant discrepancies with earlier images, most notably the curtains that traditionally hang behind the shrine had been completely changed to obscure the surrounding hall.

[6] Rely on a dream. In Chinese the term 托梦 has a set of complex associations that are difficult translate. In traditional Chinese dream theory, the dreamer leaves the head and in this dream world encounters spirits of the dead and gods and other numinous beings. These spirits may give messages to the dreamer even make specific requests of the dreamer. When Woeser uses this term there is an implication that the communication is happening with the dead, that Tibetans living under Chinese oppression are in a state of limbo between living and dead.

[7] The word “temptation” does not appear in the original poem. But the association is clear within the Buddhist context of this poem. When I asked Woeser about this line she wrote, “In fact, that is my intention: every fork in the road has temptation, which in turn affects the cycle of our reincarnation.

[9] Woeser wrote the final section of this poem three days before the fire. When the fire happened she felt she had been writing about it in advance, as if she had seen into an event that was about to happen.