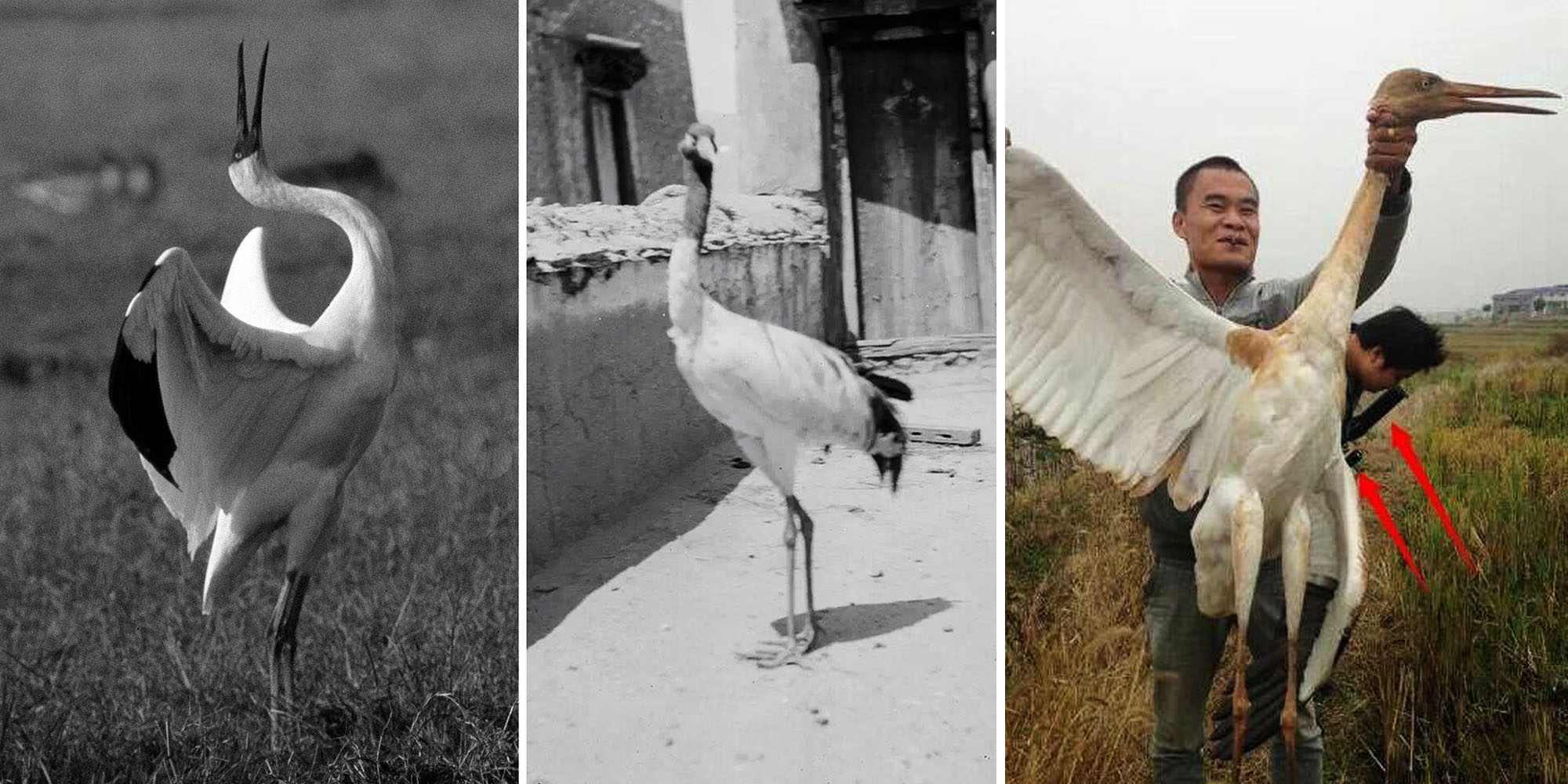 Image: Left, a white crane (Leucogeranus leucogeranus) singing in a field near Wuhan; center, a black-necked crane wandering the walkways of the Potala Palace c. 1910; right, the slaughter of what was likely the last white crane to ever step foot in Tibet.

[Translator's note: Cultural genocide is almost always accompanied by grave ecological disasters, a parallel ecocide. This poem arises from the extirpation of the Siberian crane from Tibet that occurred after China began its brutal occupation. Yes, it is a bird of great cultural importance, but far beyond that, it is something that is beyond importance. It is a denizen of the Earth, it is an expression hundreds of millions of years in the making. Culture is an expression of how we occupy our environment, how we emulate it, and more and more so, of how we change it. When we destroy a part of the environment, culture becomes nothing more than the self-replicating act of destruction. —I.B.]

passed through the Tibetan-style
latticed window

and entered, its intensity diluted

who is an expert at writing
revolving verse,

as he spoke in detail about
Gayatso’s

He emphasized the prophetic poem

about the trung trung karpo:[2]

... please lend me your wings

just to Lithang and back.

And throughout his lecture he
gestured humbly,

lifting one palm and pointing to his
back,

“In the past, to the north of Lhasa

there once existed
the Je Rak River,

a continuous stretch of fine sand

the likes of which I’m afraid

no longer exist in the whole world.

Pure white cranes would arrive in
the summer,

and in the winter they would leave,

some of them dancing,

some of them alighting,

and the hearts of those who saw them

bloomed with delight and
contentment.

“The sixth Dalai Lama looking out

from the highest terrace of the Phodrang Potala[4]

must have often seen this kind of
scene

and in this way he clearly
understood beauty.

Thus, while surrounded by the perils
of impermanence,

he chose the white crane to convey

the message of reincarnation.”

A sad smile floated to the surface
of his face

and he lifted his other arm

as if he lacked the strength to flap
his wings:

as my friends and I walked the road
to school,

We imitated them, our arms stretched
out in mirth,

chasing each other—it was the game
we loved the most.

after
that we never saw them again…”

passed through the Tibetan-style
latticed window

and entered, its intensity diluted

suitable for a broken heart.

Tsangyang Gyatso (ཚངས་དབྱངས་རྒྱ་མཚོ, 1683–1706), the sixth Dalai Lama,
was a celebrated poet and songwriter, whose verses remain popular to this day.

(ཁྲུང་ཁྲུང་དཀར་པོ་།): Tibetan word meaning “white
crane,” or Siberian crane (
). It is said that Gyatso, predicted that the seventh Dalai
Lama would be born in Lithang in Kham, and he wrote this poem:

please
lend me your wings

just
to Lithang and back.

Today, the Siberian crane is
critically endangered and has been extirpated from Tibet, the only population
left exists in western China around Lake Poyang.

: the Tibetan name for the Potala Palace, the traditional home of the
Dalai Lamas and seat of Tibetan government until 1959.