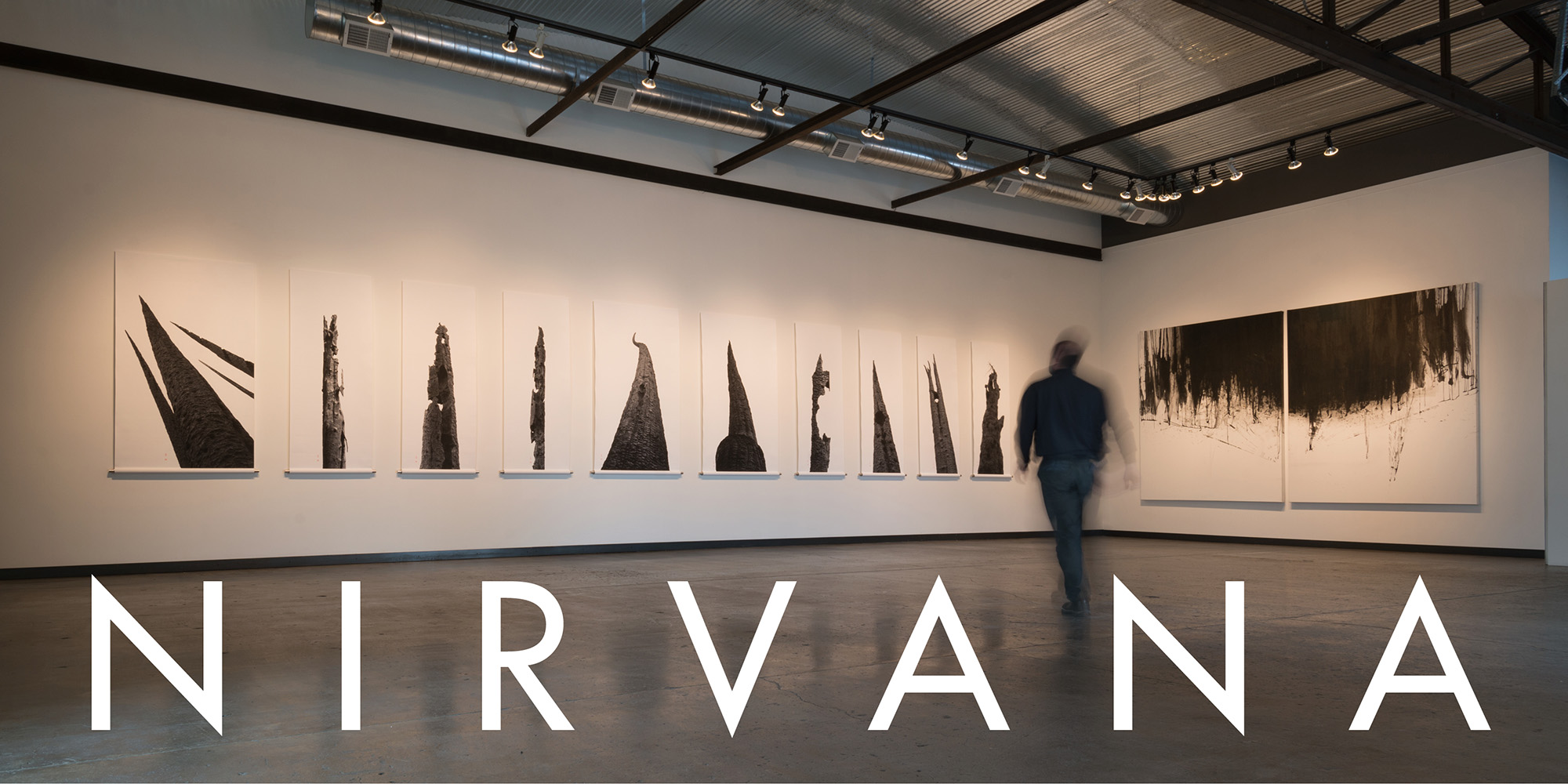 [UPDATE: photos of this exhibition can be seen here: https://www.ianboyden.com/posts/nirvana.]

The Anderson Foundation for the Arts presents artwork by Ian Boyden

The Anderson Foundation for the Arts (AFFA) is pleased to present an exhibition by Ian Boyden. “Nirvana”  presents three monumental works of Boyden's recent ecological explorations, in particular our relationship to carbon. The title work of the exhibition, Nirvana, is an installation of carbon-based photographs of the charred remains of the Tripod Complex Fire that consumed 180,000 acres of forest in north-central Washington in 2006. The second work, Amorphous, is a single monumental painting five years in the making—a field of elemental carbon. The primary pigment used in Amorphous is amorphous carbon gathered from the Tripod Complex Fire, as well as soot from the chimney of his house, the smoke of ancient Chinese pine trees, and the dust of carbonaceous meteorites older than our sun. The third work, Dire Human, presents a wall of self-portraits facing the single skull of a dire wolf. The dire wolf went extinct at the end of the Pleistocene, roughly 10,000 years ago. Its remains have been primarily found in the La Brea tar pits, where the wolves became trapped in the pools of sticky asphaltum bubbling up from deep within the ground. Unable to free themselves from the tenacious grasp of petroleum, they died, their bones preserved in the carbonaceous liquid. Boyden sees these extinct wolves as a symbol of our own inability to extricate ourselves from oil dependency.

Commenting on Boyden's work, artist Lynda Benglis writes: “There are truths that need not be explained; they exist beyond statements and within the realm of continuous possibilities. Ian Boyden's work connects us to a world that appears even to belie the materials as well as that product and the process, as the focus of his actions about the universe becomes a liquid display or a comment on non-process or the abstract or just the being!  From what, about what we might ask? Some would call this act which is continuously in motion a product of sorcery! And these acts help define in some way the person, Ian Boyden.”

Artist Timothy C. Ely writes: “If one works as Boyden does, with a goal of getting the self out of the way and allowing transcendent forms, ideas, and patterns to develop, an authentic art results that is vivid and present. This is art that breaks through to radiance.”

Consistent across Boyden's productions is an intense interest in material relevance, place-based thought, and ecology, with a deep awareness of East Asian aesthetics. He studied for several years in China and Japan, and ultimately received degrees in the History of Art from Wesleyan University and Yale University. His work is interdisciplinary, and he often collaborates with scientists, poets, composers, and other visual artists.

His work has been exhibited widely, including a recent solo exhibition in China at the I.M. Pei-designed Suzhou Museum. His books and paintings are found in many public collections including Reed College, Stanford University, the Portland Art Museum, and the Victoria & Albert Museum.

[UPDATE: photos of this exhibition can be seen here: https://www.ianboyden.com/posts/nirvana.]